The law firm of Vriezelaar, Tigges, Edgington, Bottaro, Boden & Lessmann, L.L.P. occupies the first level of the historic Williges Building at 613 Pierce Street and has been instrumental in the restoration of the building.

The Williges Building, designed by William Steele, is an excellent example of Sullivanesque architecture in Sioux City. Furrier August Williges, who moved to Sioux City in 1895, built the building to manufacture and sell furs. Completed in 1930, the Williges Building was one of the last Sullivanesque structures erected in the United States. The Williges fur and clothing operation was successful for many years but closed in 1998 and remained vacant for ten years.

The Williges was slated for demolition by its owner (a Sioux City bank) and the permit for demolition had been granted when, after a public outcry arose, local developer/builder Bart Connelly began privately negotiating the purchase of the building as well as a lease with the Vriezelaar, Tigges, Edgington, Bottaro, Boden and Ross, L.L.P. law firm to occupy the first floor of the building.

The building was placed on the National Register of Historic Places in 2007. Restoration began in 2008 and was completed in 2009. In 2010 Bart Connelly and Vriezelaar, Tigges, Edgington, Bottaro, Boden and Lessmann, L.L.P. law firm was presented with the Preservation at its Best award from the Preservation of Iowa. The award was for excellence in historic preservation efforts in the Adaptive Use category for the rehabilitation of the Williges Building.

The building contains 21,000 square feet evenly spread out over 3 floors. The interior of the building, having been a retail clothing store, was almost devoid of any architecturally significant features. The law firm’s design team began planning their vision of the new law offices, attempting to have the interior space become as pleasing in the Prairie School design as the exterior. Aided by local architect Nathan Kalaher of M+ Architects who consulted on the project, the resulting office space has drawn high praise. 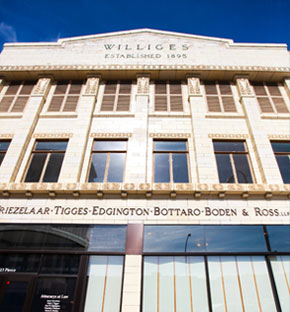